This recent article by Matt Ritchel in the New York Times gives a good introduction to the way of thinking about computers in a US Waldorf school: 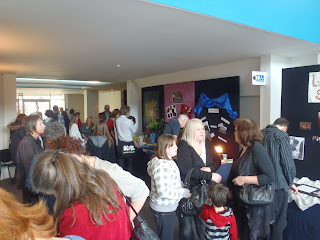 A major event in the Raphael House annual calendar is the Class 12 Project Presentations.

The wonderful diversity of these year long projects reflects the fact that they are self chosen and self directed by the students. The outcome of each one is totally dependent on each student's own effort and motivation, and therefore speaks strongly about the emerging capacities of each individual.
﻿
﻿

The pictures here show a selection of some of the displays that the students set up in the foyer  of the Little Theatre in Lower Hutt this last weekend, prior to giving the actual presentations themselves.
As part of the project, each student produces a book, outlining their goals, and the process they went through to attain them.
﻿﻿﻿﻿ You can see something of the variety of subject matter in the photos here. Many of the projects had multiple outcomes, including the learning of new skills, along with tangible products, such as the writing of a novel, making a guitar, paintings or short films.
﻿
﻿

And yet these tangible achievements, impressive as they are, are somehow not the main experience one has to take away from this event.
It is the confidence and lively interest of the students themselves which comes over in their speeches. Their enthusiasm, their capacity for self reflection, for mature social engagement and respect, as well as the love of learning..
﻿﻿
These are the deeper gifts that they have to take with them into life and which we are privileged to glimpse at the Class 12 presentations.

Laurel Andrews chose to widen her perspective on life and explore fundamental questions about "why we are here" and her underlying values.

Timothy Koelman bought a house and also published a novel for his Class 12 project...

Valeria Protassova discovered the therapeutic possibilities of working with horses.


Billie Lloyd-Bain taught nutrition and cooking skills to a school group from Taita.


Miriam Randall developed her own circus skills and gave classes to an enthusiastic group of Raphael House students. (you can read the Hutt News article of her project here )

﻿
﻿ Ruby Harrison's project was to develop her photography skills. Here is an example of one of her shots:


These images and brief words cannot of course do justice to the self actualisation that each student has gained from their project. To have a real feeling for that, we recommend that you come to see next year's project presentations 'in the flesh'. You won't be disappointed!